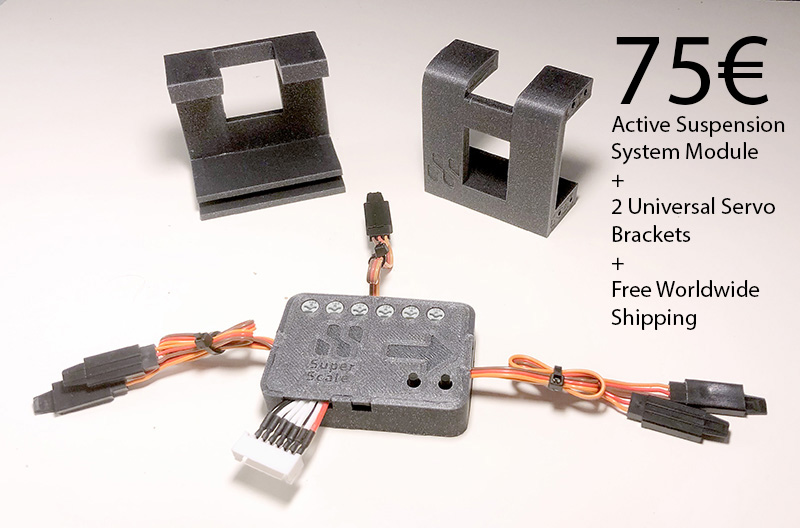 BIG UPDATE TIME: Here it is: 75€ for the Kit, This includes The module you can see in the photo and the two servo brackets. Free shipping worldwide. That's for a 10 work-days tracked air shipping. If you want it faster it's +15€ for a 5 work-days tracked EMS air shipping. (so 90€ in total). Orders will be opened once the website is up. Hopefully this weekend. Paypal payment.
TECH TALK: As you can see in additon to the power-in cable (it's a servo cable) and the 4 servo outs, there's a 7 pin JST one that will be used for the extra features. It has one ground, one +6V (or whatever you feed the power cable) and 5 signal pins. I can drive 2 servos, provide power for LEDs, or read 5 receiver signals to control the suspension.
At launch the extra features will include 1 brakes LED power/signal good for 2 LEDs (deceleration triggered), 1 for the exhaust pops and 1 output to trigger a custom sound in the sound module (audible backfire in this case). The last two need a throttle signal input.In future I will update the firmware (and provide it to everyone who purchased the kit, updating is easy, you need a PC).I have plenty of ideas for added features. Some examples:-read a receiver signal to control the ride height, or any of the other settings you can adjust on the fly-Simulate realistic acceleration rate by reading the throttle signal and outputing ESC signal.-Automatic mounting direction detection. Currently there is a direction in which the module has to be mounted in relation to the front of the vehicle. It is possible to rotate it 180 degrees (and 90 I think) and swap servo outputs to get correct motion, but this will interfere with other features.


The reason I am leaving out many features is that radio signals are often not stable and I have to do some testing and make sure reading receiver PWM signals doesn't introduce noise and it doesn't freak-out when it loses signal. Additionally radio PWM signal ranges are different and I have to make sure there's a way to calibrate.
There will probably be several combinations of features and ways to use the 5 pins based on people's needs.
The 6 knobs you can see control the following settings:
-Suspension speed
-Dampening
-Throw multiplier
-Servo range
-Front/rear balance
-Ride height
I'll explain more later. The idea is that it can be setup to work with any chassis and servos.
AGAIN, YOU CAN'T ORDER YET. I HAVE TO GO TO WORK AND MAKING A WEBSITE TAKES TIME. (My wife's making it but she has shit to do too (sandwiches)).

Another update on the run up to release

I am 2-3 weeks from having the first batch. This means I'll open pre-orders sooner than that. I know, the big question: pricing. Short answer, not decided yet. I'll be shipping to Europe and USA no problem, still have to see what's the situation with the rest of the world.
In the meantime the design is evolving. The module gained one more trimmer, controlling the multiplier balance between the front and rear, because it's always good the use the shortest servo horn possible but at the same time the rear often requires a little more suspension travel.

Pictured here is the older version with 4 trimmers. 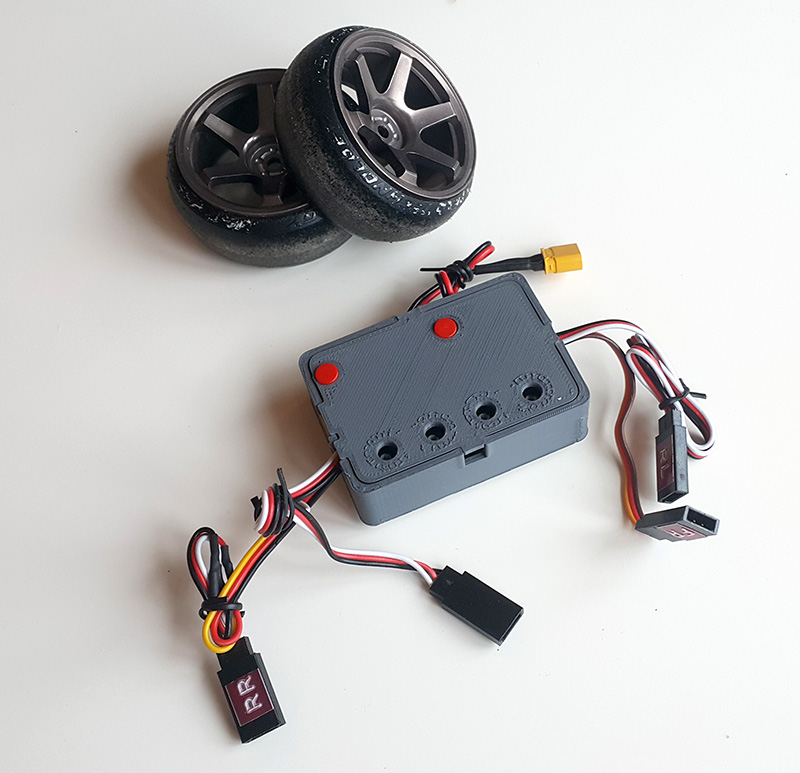 Additionally the 7-pin additional cable output (again not pictured here) will come with LED control for the brakes (deceleration activated) and ride height control through the receiver and radio.

Update on the project

The insane feedback and interest caught me off guard. I wasn't expecting people to be so impressed. Many people asked, so yes, I will be marketing this, so yes you will be able to buy it. I am currently designing it as a module. This means it will be a small box which needs power and outputs 4 servo signals which simulate the suspension. I am also adding full tuning capabilities so you can input just the suspension setup you need (stiffness, dampening, ride height) and also ways to adjust for your specific chassis and servo setup. I will also make universal servo brackets that will help you add active suspension to almost every stock chassis, you can print them or get them from me. Since the arduino has many more pins available, I am exposing them so in future I can add more functionality. I might even add native brake lights support on release. These pins can be used for outputting or reading one more servo/esc signals and read/output dc voltage.
Up in the gif you can see the system in effect on a drift chassis I had. 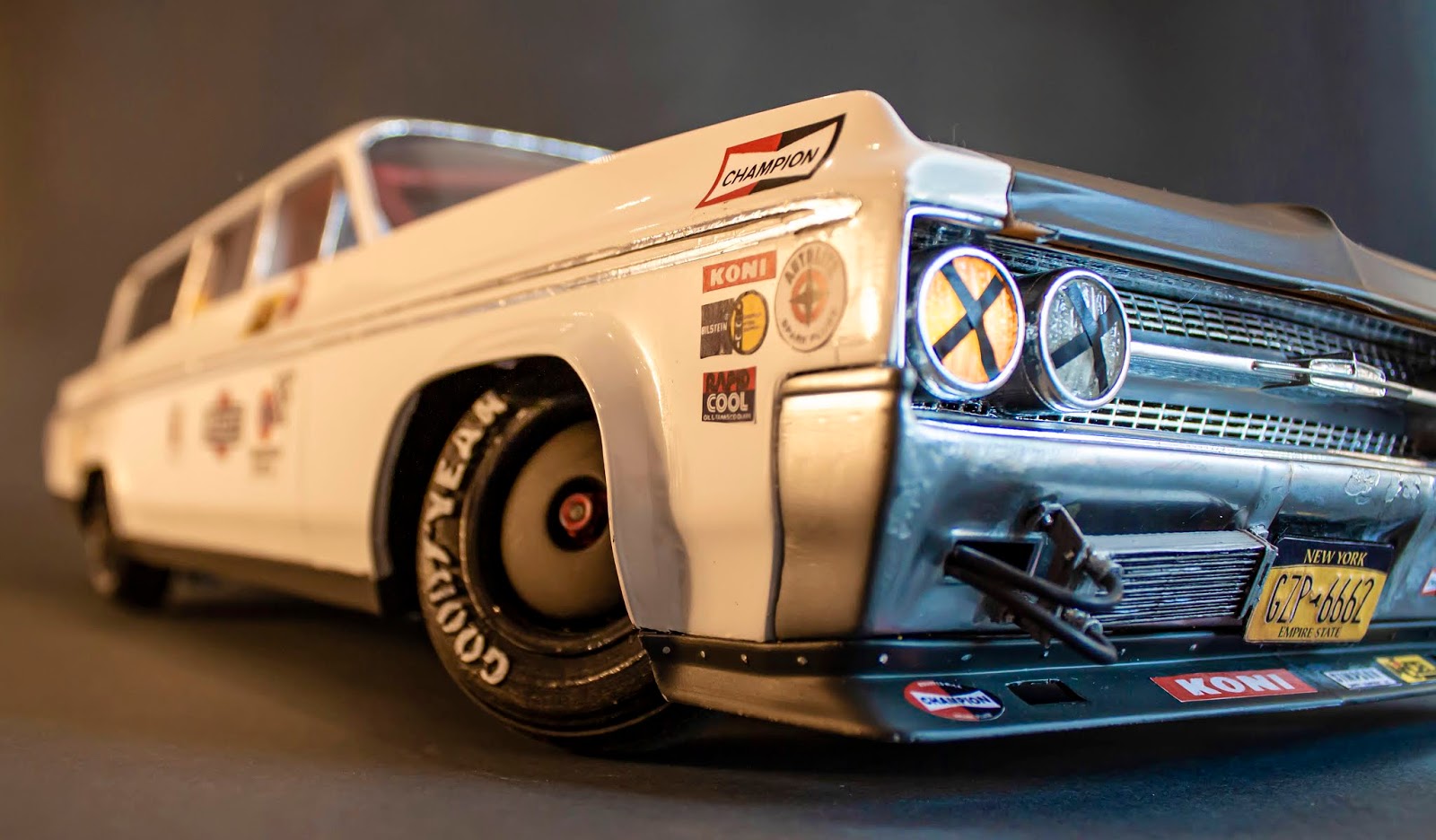 Yes, it's a mouthful, but it's been a big project that took an year to almost finish. I'll explain more further down, first check out the videos to see what it's all about.

This video is a quick preview of the active suspension system's operation. For a longer version play the next video. (sorry for potato quality)

The whole idea of the project was to see how close to reality I can make a scale model perform.  Spring rates and resonance frequencies don't scale down realistically when you go down to a 1:10 size, so I had to figure something else out. I've seen active suspension systems made before, but to improve handling. I'm doing the exact opposite. The whole system consists of a an accelerometer, connected to an arduino board, which controls 4 servos, each one controlling the ride height at each corner. It didn't start as a drift chassis, but eventually became one, so the front suspension and steering was also re-engineered to allow for a great turning angle. 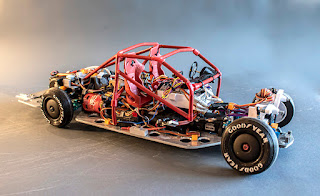 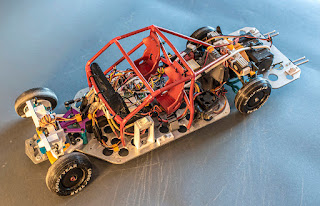 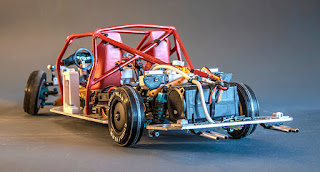 There's of course a lot I can talk about it and explain, but I will make additional posts detailing if people want to know more. In short the arduino is realtime monitoring the data coming from the MPU6050 accelerometer (X and Y axis accelerations) and based on the input calculates again in realtime the simulated suspension positions for each of the 4 servos that sit at each corner and control the ride height of the wheels. I've used micro servos, which is not the best solution for a vehicle that's about 3.5kg. It works, but I've had to develop a system of tear-drop shaped shapes that slide on control arms so I can leverage more pushing power by spreading the suspension articulation over the whole range of the servo.  You can see them well in the photos above. Had I gone for 1:10 servos I would've been able to directly control the suspension arms with a 1:1 servo motion by linking directly to a servo horn. There are pros and cons, maybe next time. I've put shocks and spring in the rear, but they are not needed for the system to work. They were added later to help with drifting.

The project started as a HSP Flying Fish drift car chassis. I know, I know, hardly a good starting point for a RWD  drifting chassis. I wasn't thinking of making a drift car, this came about later in the development, so I started with the cheapest thing I can find. There isn't much left of it anyway. I just wanted to see my idea had any practical application at all. I had zero arduino programming and 3d printing experience and very very little rc history from years ago. It is a 1:10 chassis, but the body is more like 8.5:1-ish as i was limited by the track width. The body has no flared fender and all the wheels sit inside the body at all times so there was really no way to make it narrower and in result shorter. Length is about 63cm and width 22cm. 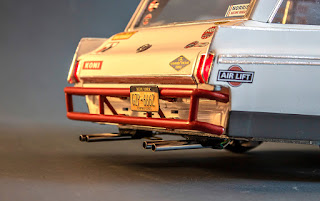 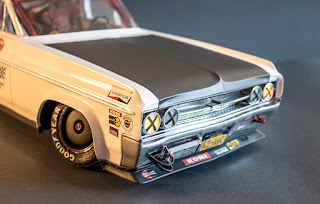 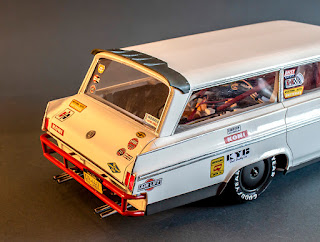 Why a 1963 Oldsmobile Dynamic 88 Wagon? Because it's cool and I wanted something heavy that will match the land yacht suspension simulation I was going for. Also I knew I could get a friend @rnd2k to make the 3d model it for me.:) 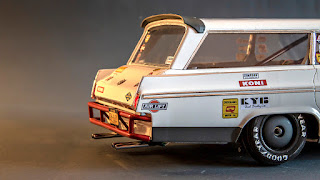 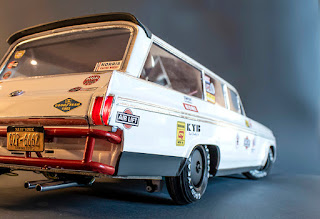 The hardbody is printed on an Ender 3. An amazing printer, not just for the price. PLA all around. In future I'd like to try Nylon and other stronger filaments because there are already a few cracks from crashes in the shell. It wasn't painted, but vynil wrapped. It''s very resistant to scratching and bangs, but it's hard to wrap such a complex shape. In many spots I did not wrap it perfectly with the wrap separating from the surface. Front bumper was chrome spray painted and then crashed into many times. I decided to leave it like that for the scale look. Most of the front and rear suspensions are also 3d printed with no issues so far. 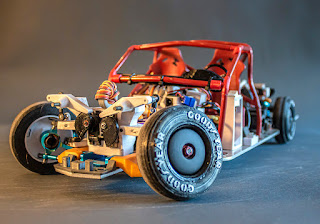 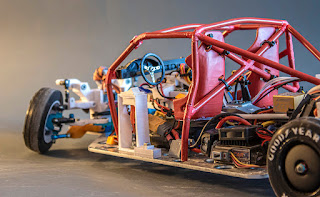 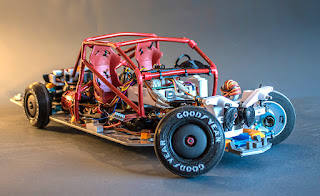 Wheels and tyres are also 3d printed and this took me way too long to figure out. The rim is simple PLA. There's no hex, it mounts directly to the spindle. I couldn't get it to spin straight with no wobbles when using a hex and hex shaped hole in the rim. Tyres are printed from 92A TPU (a soft filament, it's like rubber) and this allows for different hardness and geometry drift ring to be placed on the soft tyres. What seems to work best for these rings is 75D Ninjatek TPU. By varying the contact patch width of the tyre I can get a good feel on polished concrete or asphalt. The reason I didn't use off-the-shelf drift rims and tyres is that I needed larger ones to fit the scale of 8.5 and also thinner so they fit inside the body.
RWD drifting is a whole another science, which I'm not going to go into now as neither I am very experienced, nor this is a great drifter. It works, but it's not like a 2kg dialed in RWD chassis. That doesn't mean it's not fun. The active suspension makes it feel alive and less toy-ish. 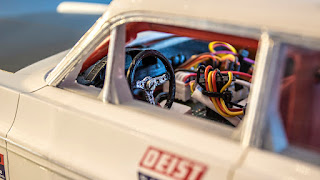 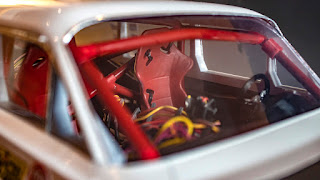 Not much is left from the HSP chassis. The tub is CNC cut from aluminum, and then I put holes in it to reduce weight. Drivetrain was converted to belt-driven to reduce noise with both the belt and the pulleys 3d printed. It was imperative to me that the car would set off smoothly to compliment the suspension and scale look. I didn't want to have it jerky and choppy as it defeated the purpose of the whole system. I went through many different motors and ESCs. It was the smoothest with a Crawmaster PRO Holmes Hobbies brushed motor and a small 8teeth pulley, but I had to settle for a middle-gound setup to allow for drifting. It ended up with a Quickrun 10.5T brushless motor a hobbywing ESC and a larger pulley for more wheel speed. The throttle signal used to go through the arduino so I can precisely control start-up and slow-down to stop, but that went out the window when I went full-on driftmode. 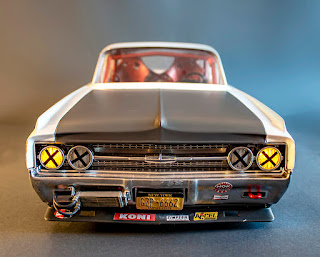 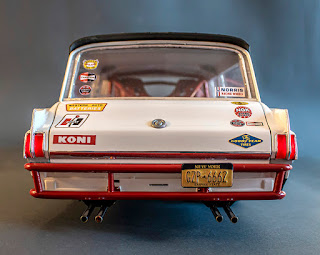 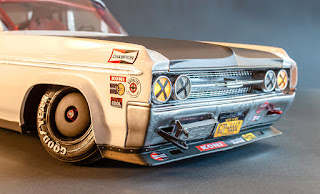 Engine sound comes from a ESS-DUAL+ ENGINE SOUND SYSTEM, that's controlled by the receiver and the arduino. The exhaust pops are a custom horn sound that gets triggered by the arduino at the same time as the leds in the exhaust are flashin on.
Radio is a FlySky GT3-B, hacked to output 6 channels. 3 of the signals are read by the arduino to control lights, suspension height, and neutral gear.
It's powered by 6 18650 LiIon cells I had from a bad electric scooter battery in a 3S configuration.

That's pretty much it, I'm happy to be finally able to wrap it up and show it off a year later. There are a million more details I can talk about, but I've tried to keep it short. I'll be happy to do follow-ups if people care and want more explanations. 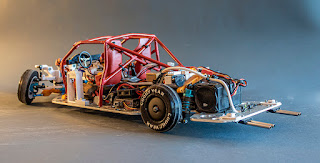